The results of the BSA Emerging Professionals Network reGEN Boston Housing Competition were announced yesterday and taking second place honors were Elizabeth Dame, co-op intern with H+A, and fellow fifth year Northeastern University School of Architecture student Benjamin Greer. The team’s proposal, “Urban Coastal”, is an answer to the question of urban density in 21st Century Boston proposed as part of the international ideas competition. The competition brief asked designers to design an innovated housing typology for one of two sites, one in Boston’s historic North End, the other in the burgeoning community of East Boston.

Elizabeth and Benjamin’s scheme takes full advantage of the North End site with a simple and efficient plan that engages in a series of maneuvers that erode the housing volume for views, light, and outdoor space. Smartly recognizing the need for engaging public space, a pedestrian wharf is sculpted from wood to further extend public access to the harbor and includes a ramp with direct access to the water as well as restrooms, changing space, and stadium seating facing the ocean. The first two floors of the building are also given over to a grocery store and 6,000 square feet of rentable retail and commercial space, further enhancing the building’s place in the public realm.

The team was kind enough to give us a closer look at the project and the thoughtful intentions behind the design. 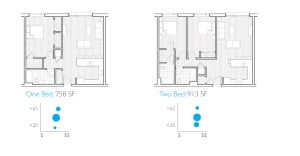 Urban Coastal is a 200 unit mixed-use development proposed for Sargent’s Wharf in Boston’s historic North End. Being located on such a high value plot of land, the project is able invite residents of differing family structures and socioeconomic backgrounds by utilizing density as a subsidy for income. Current demographics of the neighborhood drive the unit counts, designed to both absorb the high number of single-occupant residents in the North End and to entice more families into the area. The project’s innovation of a shared kitchen between two micro units will bring down the cost to build them, making micro units more affordable.

Dense urban development allows opportunities to foster increased interactions between residents. The project includes communal amenities such as a gym, media room, and an elevated courtyard. The raised courtyard provides planter boxes for urban-agriculture as well as an outdoor space for children to play that is safely removed from the public urban fabric.

The streetscape design is profoundly urban, and with public functions like ZipCar and Hubway, easily accessible. A grocery store on Commercial Street was added to fill a programmatic gap in the neighborhood as well as provide a crucial amenity for families. The back of the site celebrates Boston as a coastal city by providing an innovative node on the HarborWalk. This urban dock is designed to reconnect Boston’s people to its waterfront in a unique way and expand on the way in which Sargent’s Wharf is accessed and approached.

By blowing out the wharf and elevating the building on piers for direct ocean water drainage, water cannot pool and flood during storm surges. Two levels of on-grade parking are financially preferable to constructing and maintaining below-grade parking, and now the important program – the housing units – are elevated for further protection. A garage screen allows the parking to be an unconditioned, naturally ventilated space. The building’s façade is comprised of a sustainable low-maintenance cementitious panel which is less expensive than brick and creates a modern take on the traditional Boston wharf aesthetic.

The proposal is designed with the idea that the best architecture is architecture that works. Issues commonly viewed as “constraints” such as structure, parking and economic viability are oftentimes opportunities for exploration that will ultimately better the design when they’re considered. We set out to design not just a provocative image or concept, but a beautiful inhabitable structure representing what housing could be on the site.