Designer Christine Manke has been hard at work, collaborating with our friends behind the esteemed Cambridge restaurant, Hungry Mother, on a new restaurant experience, State Park, in the heart of Kendall Square. 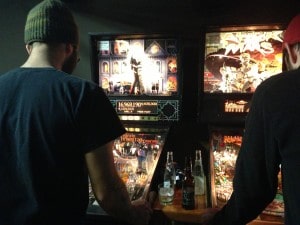 Located in the One Kendall Square campus of restaurants, offices, and laboratories, State Park is best described as a true dive bar experience, filled with neon signs, pinball machines, and a jukebox. The food is inspired by the Southern cuisine made famous by Hungry Mother, including fried chicken, pork cutlet sandwiches, and grilled pimento cheese. But that’s not all that makes State Park feel like your favorite bar back home: Christine worked closely with the owners to create a one-of-a-kind, seven foot-long diorama, populated with lazy red-skinned sun bathers, a pair of adventurous couples in canoes and a duo of campers stalked by a bear.

Already, the restaurant has created a buzz throughout the scene. The Boston Globe’s Devra First stopped by for a quick bite, reporting earlier this week on the unique scene and calling the food, “proudly American, with a Tennessee drawl”. The foodies at Thrillist, have also included it (along with H+A’s other recent restaurant opening, Gather at District Hall) in their list of Boston’s hottest restaurants, naming it as one of the “13 new Boston spots you need to check out right away”.

So, get to it. The next time you’re in Cambridge, stop by for a cold bear and some pickled eggs. And don’t forget the quarters.